Nicole Ciaramella/Cyberbird is a talented photographer from New Jersey, who is also quite an amazing cosplayer! 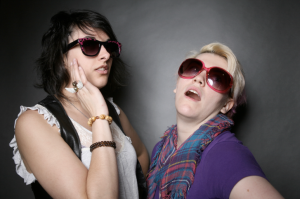 Nicole Ciaramella/Cyberbird and Judith Stephens, photo by Ejen of Cosplay in America

How many years have you been into photography and what got you into cosplay photography?
My love for photography came after my first trip to Japan, back when I was a sophomore in high school in 2004. I was so inspired to capture my surroundings that photographing at that time came naturally to me. So with an old Olympus point and shoot I took images that made me realize: maybe I was actually alright at this. I picked up the camera more often after that, and began photographing my friends in costume at small local conventions and around home as practice and as favors. Lionboogy was a well-known cosplay photographer among my friends at the time, and he became one of my first role models for inspiration. Ultimately this new drive was what got me to apply for my Art Photography BFA, and cosplay has helped me fulfill that degree, being used in a lot of my work and my final exhibition, which can be seen on my website. 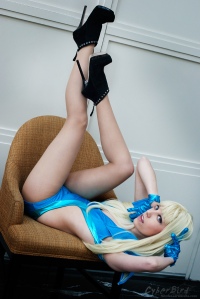 What regions do you usually cover, and do you charge for photoshoots? Also, how does one get in contact to shoot with you?
I’m located in New Jersey, and so for the most part I’m usually always in attendance at Katsucon, AnimeNEXT, AnimeUSA, Otakon, and NYCC/NYAF. Last year I was working with CosPrints at AnimeCentral in Illinois, and we are talking about going back there again this year to run the cosplay photobooth. This year I was also a second photographer for Marvel.com at NYCC. I occasionally put out a call for cosplayers who want to shoot outside of the convention scene in and around NJ as well, and will travel to New York City for additional locations.

I don’t actively advertise that I am available for shoots, because a number of times I carry a multitude of hats at conventions and find it hard to schedule private shooting time. In addition to being a cosplay photographer, I also shoot the fashion and concert events when possible, am a cosplayer myself, and am currently a dealer’s helper and model/stage dancer for friend YuffieBunny’s cyberfall company Head Kandi. Needless to say it gets hard to keep a schedule, but I have gotten a couple of requests via email, which so far has been the best way to formally reach me at ciaramella.nicole@gmail.com. For an official private shoot I charge $25 for one or a group of two, and if you are a large group it’s $5 for every additional person (for example a 5-person group would be $40).

What type of photoshoots do you prefer and why?
Lately I have enjoyed the photoshoots outside of conventions more, because there is no rush of other schedules, and no limit to location. As of now the majority of the people I photograph outside of events are friends or good acquaintances looking to build their cosplay or modeling portfolios, and so we meet up at each other’s places, prepare, and go from there. A lot of times I get my inspiration not only from the model but very strongly from the location, and love traveling to get interesting environmental portraits.

What is some of your favorite equipment you work with and why?
I wouldn’t say I’m one to boast about equipment, because I hardly have some of the best, but I am an avid Nikon shooter and prefer to use natural light over strobes. I feel as though there is a certain taboo with mentioning Photoshop, but if used properly, it’s also a great tool. You cannot make a bad photo look great in Photoshop though, so creating a great photo and adjusting upon it is always the goal. But I love editing just as much as I do taking the photograph; adjusting the colors and refining it to bring the image to life in a natural way.

What are you excited to be working with in the future and why?
I can’t be sure of what I’ll be doing in the future, but lately I’ve slowed down with my cosplay photography due to a lack of time and have enjoyed doing more scheduled on-location shoots dealing with costume or fashion. However, I never expect to lose that sense of costume aesthetic completely or entirely leave the scene fro a while, because it’s what I truly enjoy.

What are some of the traits you like to see in other photographers and who do you think does them well?
Photographers that have a better sense of the mood or characters of the genre they are photographing overall make better images and have greater results. I love seeing a complete immersion of the character into the environment. I also admire photographers who can create amazing scenes with flash. Strobes are great for private shoots, especially in a dimly-lit convention center or hotel environment. However using strobes can get kind of tricky, and I wouldn’t say I enjoy seeing them outside of private locations. 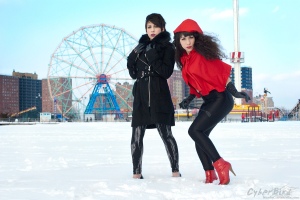 Twin Bees in their own fashion designs, photo by Nicole Ciaramella/Cyberbird

What is your view of the “cosplay scene”?
Having been involved in the so-called “scene” for just about ten years, it’s immediate to me that it has done a great deal of evolving and changing. In terms of photography in the cosplay scene, new technologies and ideas are constantly deciding what the new attraction is; most recently it has been steady-cam video montage, which, when done right, is an incredibly eye-catching way to experience what a convention and cosplay is all about. More and more notable photographers are emerging, and more and more equipment is popping up on the spot, and I can only wait and see who comes up with the new trend next.

What are some of the things you want to see change in the scene?
Overall cosplay and costuming is different to everyone. Each convention has a different atmosphere, and cosplayers all have differing goals, whether it is to make the best costume they can, or to get the best photos they can, or to impersonate their characters and perform the best that they can, etc. One thing that I will stick to always, however, is this: the experience is what you make of it. If all of your friends have similar goals in mind, no matter what, you will have a good time. You have no reason not to. I notice that a lot of people lately have been concerned with the actions of other cosplayers and are heavily competitive. That’s natural in this type of environment, but it upsets me when I see people too affected by it.

What is some advice you could give people starting to get into photography?
Do what feels natural. Photograph what attracts you, or what you want to convey or express, and go from there. Some things may come easily, other times you will take terrible photographs and have a bad session, but you will learn from them. I find that the best thing for cosplay photography specifically, unless you are going for a reenactment of an event, work better when there is less to pose a distraction in the background. When the environment around the cosplayer is less busy, the images come out better overall with the model as the focus, as any portrait photography should be.

What are some of your favorite conventions you’ve attended and why?
In its most recent years Katsucon has always been a fun convention for me. The new space is large and impressive and I have a good time there overall, photography and otherwise. The beginning of last year was where some of my current favorite images came from. I would say I haven’t had a bad experience at a convention in quite a while though. They all have their good and bad points overall. 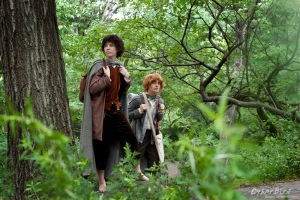 Scootkadoot and Bombaycake as Frodo and Sam from Lord of the Rings, photo by Nicole Ciaramella/Cyberbird

I am a cosplayer, a nerd, a geek. I am whatever you call me. However, I have a brain and tend to use it.
View all posts by Yunie →
This entry was posted in article, interview and tagged article, cosplay, interview, photographer, photography. Bookmark the permalink.