It’s time for another interview, this time with Rukia Hitachiin! She’s a talented cosplayer from California, who is quite the cosplay collection! 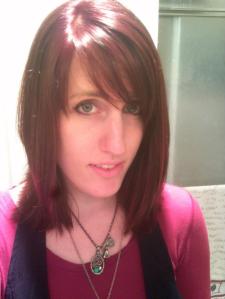 Rukia Hitachiin out of costume

What’s your cosplay alias and why did you choose it?
Rukia Hitachiin. Rukia (from Bleach) was my newest cosplay at the time I made the name, and I was really into Ouran High School Host Club at the time as well. My favorite characters are the Hitachiin brothers, so it was my way of combining the two. I started using it on forums, as my “fan-name” for Fanime, and eventually the name just stuck. I have an occasional person call me Rukia in person, too! 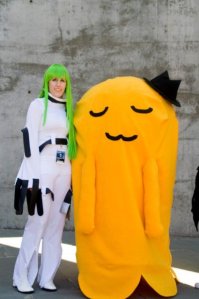 How many years have you been cosplaying and what got you started?
I started officially cosplaying in 2006, so 6 years now! In 2005, I was at Sunrise Mall in Roseville and saw a flyer for an anime convention at the mall in a week or two. I was completely excited. I’d never heard of such a thing and, at the time, knowing people who knew what anime is was a rare blessing. At the convention, which was one of the first SacAnimes, I saw what I now know to be “cosplayers.” I’ve always enjoyed playing a character and Halloween was a big holiday for me as a kid. Now knowing that people who not only like anime but also dress up as their favorite characters led me to want to make my first costume. I had a seamstress friend make my first cosplay, Edward Elric, and wore it to a SacAnime in 2006.

What has been some of your favorite things to work with when constructing costumes and why?
Fabric paint! I love how vibrant it shows up on fabric and that it’s a paint that won’t wash away. There are so many little details you can add on with fabric paint, rather than cutting out a shape with fabric and gluing or sewing it on (both of which may not look the best). It also allows you to get completely creative and lose yourself in the art.

What are you excited to be working with in the future and why?
I have a few future cosplays that have accessories made of metal. I love metal, but I’ve rarely worked with it. It will be a really interesting experience!

What are some of the traits you like to see in other costumes and who do you think does well in them?
Detail! I know from experience how great it is when you spend so much time making sure your cosplay is accurate down to the last detail and someone comments on something you can only notice on close inspection. Like, having a prop that was only in one episode, but a memorable one, or making your shoes look identical to the character’s shoes. I appreciate seeing attention to detail in others’ costumes – I feel like they’re more knowledgeable about the character they’re cosplaying and that I could potentially discuss the show the character is from with them.

What is some advice you could give people starting to get into cosplay?
I continually try to drag more of my friends to anime conventions and almost all of their excuses for not wanting to go are lack of costume. When I first got into cosplay, I would watch anime with an eye for costume pieces. I chose to cosplay characters that wore one or more articles of clothing that I own, whether it was shoes, a shirt, or even a headband. I think starting with what’s in your closet is not only cost effective, but it leads to creativity. If you see you have a shirt with ruffles just like your favorite anime character, but whose shirt has a symbol on the front, go out and buy fabric paint and paint it on. Alterations are, to me, much more enjoyable to work on and employ creativity more than sewing something “from scratch” (from purchased fabric).

What are some of your favorite conventions you’ve attended and why?
Due to cost and distance, I’ve been sticking fairly local for my conventions, so my “favorites” are simply the ones I can afford to go to. Fanime in San Jose is great as far as the people and the vendors. The guests aren’t the best, but there is always something to do and there are a lot of hotels in the area. SacAnime has fantastic guests (lots of voice actors) but the location is too crowded for the amount of attendees. Again, great vendors, but the events tend to end fairly early leaving not much else to do but go to your hotel room or house. SacAnime will be changing locations to the Convention Center in January of next year, however, so I believe then it will become my ultimate favorite convention.

Give a random fact about one of your costumes that you’re proud of.
I am super proud of my Lady Gaga costume (Paparazzi). Random fact, I hand painted each of the mouse faces onto the fabric, most of which while I was wearing it, and drew on the detail of the faces. The whole costume took me months to make for that reason. I’ve had many people ask if I used a stencil, which sounds like it would’ve been a good idea, but knowing this after the fact isn’t as helpful. All worth it for Gaga though.

Rukia Hitachiin as Lady Gaga from Paparazzi, photo by TuxedoVilay

Thanks for the interview, Rukia Hitachiin! Hope to see you at a convention soon!