It’s time for another interview, this time with YueKurine! She’s a lovely cosplayer from Canada, who has been in the scene for over a decade!

What’s your cosplay alias and why did you choose it?
I most commonly use YueKurine. Yue being the name of an original character I’ve had since I was young, and Kurine being my real last name roughly translated.

How many years have you been cosplaying and what got you started?
I’ve been cosplaying for about 12 years now. My first convention was in 2001. Back then I didn’t know the difference between a needle and a pin, so I enlisted my grandmother’s help and she made my first cosplay – Card Captor Sakura. Since then, I was hooked and have been learning since. 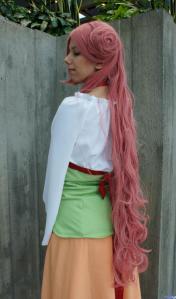 YueKurine as Euphemia from Code Geass, photo by Eurobeat King

What has been some of your favorite things to work with when constructing costumes and why?
All the details! I love finding/making all the accessories to go with my costume and doing the fine detailing that really brings the costume to life. I also like it when I can have props with my costume/character, it gives more versatility when posing for photos.

What are you excited to be working with in the future and why?
Mascots. I’ll be making Trainer dress-sphere Paine from Final Fantasy X-2 for our group in the new year. I have plans for making her bird using some new textiles. I love finding new ways of challenging myself.

What are some of the traits you like to see in other costumes and who do you think does well in them?
I love seeing attention to detail, as it’s my favorite part to do myself. I get excited seeing others who feel the same way; anything from colors of fabric to fine accessories that can be easily overlooked.

What is your view of the “cosplay scene”?
I simply love it! I think everyone does an amazing job; it’s filled with such a vast array of creative and artistic people! I love being able to see something I admire and learning something new from them. The majority of cosplayers I’ve met are super friendly and more than willing to share tips with you.

What are some of the things you want to see change in the scene?
Acceptance from everyone would be amazing, both those outside our hobby and those within. No one likes having their mistakes pointed out to them or that they don’t ‘fit’ the character. We do this for fun and enjoyment; otherwise we’ve completely missed the point.

What is some advice you could give people starting to get into cosplay?
Do what you are comfortable with, picking a costume within your ability is important. Also don’t let what other people say get you down or discourage you from cosplaying if you enjoy it. When I first started I had friends and even family frown upon it, thinking it was a waste of time or just ‘dumb’, but I persevered and now even my dad is into making props.

What are some of your favorite conventions you’ve attended and why?
Anime Expo holds some great memories for me but I haven’t been back there in several years due to lack of money. Sakura Con being a much closer and more easily affordable convention has always been pretty awesome, but really any convention that I attend with my friends makes it special.

Give a random fact about one of your costumes that you’re proud of!
My Lulu costume consisted of over 50 leather/pleather belts individually wired into place. 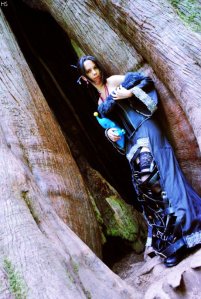 YueKurine as Lulu from Final Fantasy X, photo by HappySqueak

Thanks for the interview, YueKurine! If you’d like to see more of her work, you can go to her Cosplay.com account!