It’s time for another interview, this time with Seifer-sama! She’s a talented cosplayer from California, who has made absolutely beautiful costumes!

Seifer-sama as Puppet Zelda, creator of Zant costume from The Legend of Zelda: Twilight Princess, photo by LJinto

How many years have you been cosplaying and what got you started?
I have been cosplaying and going to cons since 2006. I didn’t start making my own cosplays until 2008 though. In 2006, my friend mentioned that there was an anime convention nearby and dragged me along with her. I had such a wonderful time that I have been going ever since. 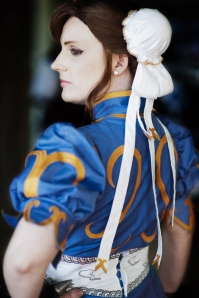 Seifer-sama as Chun Li from Street Fighter, photo by Shibuya

What has been some of your favorite things to work with when constructing costumes and why?
Some of my favorite things to work with have been wonderflex, suede and taffeta. I use wonderflex for all of my armor pieces and I just love it. It’s solid and sturdy and I don’t have to worry about it breaking if I have a clumsy moment. As for suede and taffeta, I have no idea why, but they are some of my favorite fabrics to work with. If I could get away with it, I would probably make entire costumes out of each one.

What are you excited to be working with in the future and why?
I am really excited to start working with props and LED’s. I have had a few ideas in the past for props, but never really had an idea of where to start. I think I am finally confident enough in my skills to put some of my ideas to the test. Hopefully the results will be worth it.

What are some of the traits you like to see in other costumes and who do you think does well in them?
I like to see a lot of different traits in other costumes. I love details and embellishments! I love to see people try unique techniques and creative ideas. As for who I think does well in this area, I would have to say everyone succeeds in this area. Everyone’s costume is different and therefore special.

What is your view of the “cosplay scene”?
I think for the most part, the cosplay community is a very supportive one. You have a group of people with similar interests gathering together to cosplay their favorite characters and to share their vision of that character with others. I think it does have it’s bouts of drama, like everything in this world, but for the most part, I think it’s a positive community and I am so happy to be apart of it.

What are some of the things you want to see change in the scene?
As for what changes I would like to see, I would love to see the “bad mouthing” of other cosplayers stop. I know that everyone has a right to voice their opinion, but I think doing so to deliberately hurt someone’s feelings or attack them personally is uncalled for and really immature. I believe that every cosplay is beautiful and that a person shouldn’t be judged solely based on their gender, their race, their looks, their height, or their weight. That’s not what cosplay is about. We are cosplayers, not models. The point of cosplay is to show your personal interpretation of a character, not to become that character. Let’s face it, not everyone can be as thin, as buff, as short, or as tall as some of these characters, so why judge someone on something they have no control over? I would like to see people forget the unimportant details, and just appreciate each costume and embrace each one for its unique differences. 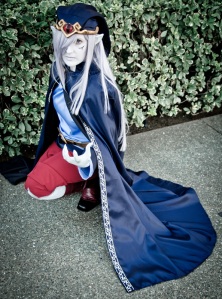 Seifer-sama as Vaati from The Legend of Zelda: Minish Cap

What is some advice you could give people starting to get into cosplay?
My advice to new cosplayers is to have fun. Cosplay is about fun! Also, it doesn’t matter if this is your first costume or your fiftieth, ask questions, try new things, and research as much as you can. You can always learn something new and the more you learn and try, the better you will become. I would also say to newcomers, don’t be intimidated by advanced cosplayers, they started at the beginning once before too. They are where they are because they put in time and effort. They have made mistakes and learned from them and kept practicing. If you stick with it and continue to do your best, you will get there one day too.

What are some of your favorite conventions you’ve attended and why?
Some of my most favorite conventions are Sac-Anime, Sakuracon, and Fanime. I think each con has a very different flavor and they all vary in size, but each time I go I meet some of the most amazing people and experience some of the most memorable events. I love meeting other cosplayers who are passionate about the same games and shows as me and talking about our successes and struggles in the cosplay world. It seems like each time I go to these cons I end up meeting someone new and interesting. I look forward to each one every year.

Give a random fact about one of your costumes that you’re proud of!
A random fact about one of my cosplays that I am immensely proud of is that I hand embroidered all the flower designs on my Terra cosplay. I had only done embroidery once before on another costume, but not nearly to the extent that Terra called for, and the technique I used for Terra was a new one, and pretty advanced. The process took me almost a year to complete, but I am so happy with the results. The embroidery is all across the dress, on both gloves, and on both boots. It’s probably my most favorite costume to date. 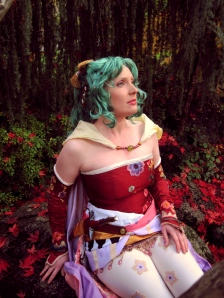