It’s time for another interview, this time with Rae! She’s a talented cosplayer from Taiwan, who is new to scene and a fan of the community!

Rae as Kaito from Fleeting Moon Flower, photo by John

What’s your cosplay alias and why did you choose it?
I go by Rae, which is a nickname that I used in school which sounds like ‘thunder’ in Mandarin (雷). Furthermore, ‘雷’ is also the surname of my Mandarin name, so I go by 小雷 (literal translation: small thunder) here in Taiwan. So it comes a full circle!

How many years have you been cosplaying and what got you started?
I am a relatively new cosplayer (and officially started in 2011). Despite that, I have done more than 20 costumes since then. It all started when a friend suggested to our group of friends to do a mass Kuroshitsuji cosplay group back in 2010 and I ended up being Grell because I was flamboyant just like him. I put cosplay on hold for a while for personal reasons than started cosplaying again more seriously a year after.

What has been some of your favorite things to work with when constructing costumes and why?
I love using trims, ribbons and lace to add a little bit more fanciness to the costume and accessories. The fabric market I go to sells some cheap and beautiful cloth that has oriental designs and I really like working with that especially because it’s smooth and soft.

What are you excited to be working with in the future and why?
Oh man, I have way too many to list. I have quite a number of completed costumes that I have yet to debut and have a photoshoot for; some are Dave Strider, Love Colored Ward Luka and Matsuoka Rin. For the most immediate WIPs, I am working on Tomie and Ludwig Kakumei; I read these two mangas a while ago and I have always really loved them so I decided that it is time to embody my favorite manga characters.

What are some of the traits you like to see in other costumes and who do you think does well in them?
Good/suitable makeup and wig styling. I’ve seen cosplayers who have gorgeous costumes but their makeup and wigs do not complement their outfits and it feels like it is missing the extra ‘muchness’.
Most crossplayers I’ve seen are AMAZING at contouring and other makeup skills and I applaud anyone who can make facial hair look convincing!! Not to mention, big and insane wig styles; I could never do something out of YuGiOh.

What is your view of the “cosplay scene”?
The cosplay scene in Taiwan is definitely very different from what I’ve seen in America/Canada/the west. It’s somewhat more conservative, I guess. I find that it’s a bit hard to talk to others because Taiwanese people tend to be more soft-spoken (or maybe cause I intimidate them with my height). However, most cosplayers may not show it, but they are usually very welcome to others. The cosplay culture in Taiwan seems rather latent. Yet, the community is a lot more intense and more developed than non-cosplayers realize because it all thrives online. When con days approaches, cosplayers get into gear and suddenly a bunch of cosplay selfies start popping up, haha. It is generally a really fun and chill community and I’m glad to be a part of it. 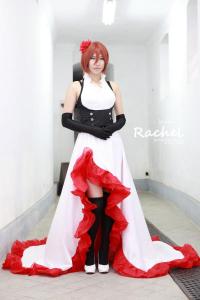 Rae as Meiko from Vocaloid, photo by SGloveJacky

What are some of the things you want to see change in the scene?
Cosplayers in general can get competitive, especially the popular ones, because I feel like people are constantly competing to be more original, more sexy, more professional and stuff that they tend to lose sight of what cosplaying is all about. I also wish that the stigma of cosplay (where cosplay is for weirdos and stuff) can be removed one day; I couldn’t tell my family that I am a cosplayer without them thinking I’m a freak or a loser.

What is some advice you could give people starting to get into cosplay?
Never be afraid to mess up and start over. And it is ok to thrift and modify existing things for cosplay. I thrift so much that I know every second hand shop in my area and it’s better for me because I am often on a tight budget. Cosplay is all about finding alternatives to create a desired prop, clothing or hairstyle and it is important that you are willing to start over when it really just doesn’t work.

What are some of your favorite conventions you’ve attended and why?
I’ve really only been to ones local in Taiwan and never attended any outside of my country. The ones I attend include Comic World Taiwan, Petit Frontier, Fancy Frontier, etc. which are also my favorite ones. There is a LOT of cosplayers, especially during Comic World Taiwan, because that is held during summer and I just love seeing so many different cosplayers and people of the same interest gather.

Give a random fact about one of your costumes that you’re proud of!
I drink bubble tea almost once a week (Taiwan’s national drink, yo) and since 96neko loves it, I figured I gotta have bubble tea with me during this photoshoot for 96neko!

Rae as 96neko from NND Utaite, photo by TTK

Thanks for the interview, Rae! You can see more of her work on her Deviantart, her Tumblr, and her blog!