It’s time for another interview, this time with Mako-chan! She’s a long-time cosplayer from New Jersey, who loves when cosplayers get creative with their costumes! 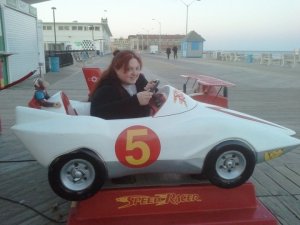 What’s your cosplay alias and why did you choose it?
My cosplay and radio alias is Mako-chan. Makoto Kino is my main cosplay, and my favorite anime character. While I had Jupiter themed nicknames in high school, DJ RanmaS actually started calling me Mako-chan on his podcast, Anime Jam Session before I started working on the podcast with him.

How many years have you been cosplaying and what got you started?
I’ve been cosplaying for over ten years. A friend invited me to a local convention and we had both been interested in the concept of cosplay that we had seen on various Livejournal groups. So with less than a week of prep, and the help of my mother, who encourages me to be crazy and unique, we came up with my very first cosplay, Washu from Tenchi Muyo, complete with glue styled anime hair. 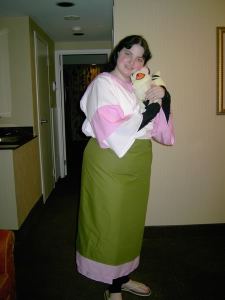 Mako-chan as Sango from Inuyasha

What has been some of your favorite things to work with when constructing costumes and why?
Anything that I can be crafty with. I’m not a pro at all, and don’t pretend to be. I cosplay on a budget and am proud of it, so when I’m able to just craft away with felt and glue, or clay and wood, just to make a small prop or accent piece for a costume; I have so much fun. The most fun I’ve had is making my wand for my Hermione cosplay. I took a wooden dowel and a decorative couch leg and created something that not only functions but looks great. I love nontraditional cosplay. Casual cosplay or creative twists on characters are always my favorites. You get to put more of your own creativity into the character. I’ve done a Japanese school outfit for Daisy, and I’ll be doing a fem-Mario for a con this year.

What are you excited to be working with in the future and why?
Right now I’m not really working on anything new sewing-wise. I’m focused on Anime Jam Session and doing more with press. I’m enjoying going to conventions and talking with the cosplayers, finding out how they’re doing, and what they think of the con scene. I’ve been tweaking cosplay that I already have though, and creating closet cosplay that really excites me.

If I had to choose something that I’d really like to work with it would have to be metal work. I dabbled in jewelry making in high school and really enjoyed working with the metals and stones to create jewelry. I’d like to expand on that to do detailing and accessories.

What are some of the traits you like to see in other costumes and who do you think does well in them?
I like to see accuracy. I don’t find issue with fabric choice unless it makes a costume shiny and it’s not supposed to be, however I love to see that someone put in enough effort to make the correct color choices, or sewed that one strip of pink into an outfit even if it can only be seen if the arm is at a certain angle. As for who does well in costumes, anyone does. I’m a big advocate of cosplaying what you want, but also cosplaying to your size. By this I mean that adding or subtracting material to make it proportionate is perfectly ok. As an example, if you have two basic skirts bought from a commissioner, make them aware of the length of your legs. If you’re smaller, a shorter skirt can make your legs look longer. It works just the same the other way as well. If you have longer legs, you may need a longer skirt just to get the bottom hem at the correct height. It has nothing to do with how big, small, round, flat, or whatever other shape you’d like to label yourself. It’s all about the correct fit and accuracy to the characters outfit.

What is your view of the “cosplay scene”?
I miss how the “scene” was 10+ years ago. Current cosplay is more like a popularity contest. I got into cosplay to be around others like myself and find a place where my geekiness fit in. Now people are getting into cosplay to be discovered as models, actors, or to just generally become popular.

I’m also very laid back with cosplay. I have no issues with those that do professional shoots, but more with the attitude that some have about being shot only by certain people, or in certain area’s of the convention. 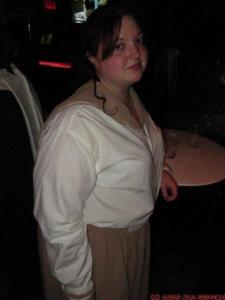 What are some of the things you want to see change in the scene?
The changing of the “it scene” entirely, so that cosplay goes back to being something for fun and not about Facebook likes, which agent you have, or which TV show will be staring you next, and when photographers were excited to see someone in a wig and not their natural hair.

What is some advice you could give people starting to get into cosplay?
Cosplay is a hobby. Treat it as such. If you don’t have tons of money, don’t be afraid of thinking outside of the box. Hair is usually the easiest way to recognize a character. So do a casual version. Learn slowly, build up to the larger costumes, and enjoy yourself. If you aren’t having fun, than there is no point in continuing. Don’t feel threatened or jealous if someone has a better costume than you, and what ever you do, don’t give up because of what other people think.

What are some of your favorite conventions you’ve attended and why?
I love my local conventions. AnimeNEXT has been my staple con for years. I’ve always loved the people, the staff, and the guests. Lately it’s been getting too big for itself though. I’m starting to really enjoy smaller cons as I get older though. There isn’t that crazed cosplay scene, so it doesn’t feel stressful to get ready for, but the cosplay is still awesome and elaborate. Kotoricon has become one of my favorite anime conventions. It’s one college campus that does the con thing correctly. The con I most look forward to every year is PAXEast. While not many cosplayers, the crowd that comes together is just so different than any con I’ve ever been to, and those that do cosplay are amazing.

Give a random fact about one of your costumes that you’re proud of!
Washu was my first ever cosplay and I wanted to do something different for the character, so I sat the night before the convention and glued and sewed felt together to make one of her little puppet dolls. Silliest thing I’ve done for a cosplay, but also one that I’m most proud of. 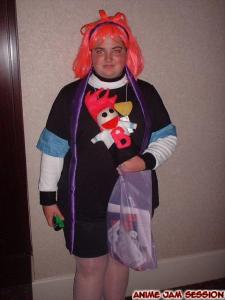 Thanks for the interview, Mako-chan! You can check out more of her work on her Facebook page!