It’s time for another interview, this time with Lenore! She’s a handicapped cosplayer from California, who wants to see the discrimination in the community disappear and for everyone to just have fun!

Lenore out of costume

What’s your cosplay alias and why did you choose it?
My cosplay name is Lenore. I’ve used this name as a stage name for the last 8 years or so. I originally chose the name because I was reading a comic at the time called Lenore The Cute Little Dead Girl by Roman Dirge. He got the name from Edgar Allen Poe and I got the name from his comic. Occasionally in 2006-2007ish, I used the name to hide my real identity while helping with a radio show in San Diego, CA.

How many years have you been cosplaying and what got you started?
I’ve been cosplaying off and on since 2003. My very first was Chi from Chobits and I wore that to San Diego Comic Con that year and the following year. When I was Googling things about the anime, I came across a few pictures here and there of people dressed up as her and stumbled across Cosplay.com sometime around then. I didn’t see as much cosplay at conventions then as I do now and the number of people who came up to me for pictures and to chat was really an amazing experience. However, I was so nervous before getting out of the car to go into the con that I got a nervous hive rash on my chest and had to wait for it to go away before I went inside! 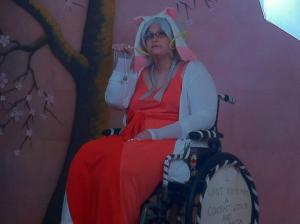 What has been some of your favorite things to work with when constructing costumes and why?
I love what I do with the wheels of my wheelchair and other people at conventions seem to love it too. I make “hubcaps” for the wheels of my chair that matches the cosplay somehow. My Pokeball ones for Pikachu were a huge hit at Anime Expo 2013. The wheels make me smile even more than my cosplays do sometimes because of how people’s faces light up when they see them.

What are you excited to be working with in the future and why?
I’ve decided to branch out in terms of genres and even genders I cosplay from. I’m planning a lot of crossplays coming up, especially for Stan Lee’s Comikaze. My fiancée is going to be Jessie Pinkman from Breaking Bad and I’ll be Walter White. I’m not only going to crossplay, but also work with makeup effects I haven’t tried yet, like a good quality bald cap, etc. I’m taking this one to a level over 9000! I’m really excited to see how Breaking Bad fans will react to it, especially when they find out a young lady is under all that makeup etc.

What are some of the traits you like to see in other costumes and who do you think does well in them?
I’m fascinated by all the LED light work people do for props and costumes. I tried for a very long time to figure out a way to rig some white flashing LED lights all over my Pikachu kigurumi so my fiancée could yell “PIKACHU! USE THUNDERBOLT!” and I could “PIKAAA..CHUUUUUUUU!!!!!” and have the whole suit flash like crazy.

What is your view of the “cosplay scene”?
I’ve made sure to surround myself with cosplay friends and other cosplayers who ooze positive thinking. I’m a member of a great Facebook group who helps each other out and brings great support to one another. Without them, I think I’d be too nervous to go through with any cosplay ideas I have for the future. I see other cosplayers constantly give each other support, ideas, and love. There’s plenty of negative people out there too, but see my answer on advice to new cosplayers for how I feel about them.

What are some of the things you want to see change in the scene?
The biggest issue I see get discussed in the cosplay community is discrimination; race, gender, disability, weight, etc. I think we would all love to see that stop. It takes a lot of guts to leave your house in a cosplay, swing by the 7-11 for coffee like Pikachu does that everyday, and then go into a convention hall with thousands of people. Most of the Debbie Downers who tear someone down because they’re not a carbon copy of the character I think don’t understand that tense feeling. There’s no wrong cosplays. I will acknowledge there’s different skill levels, but there’s no wrong way to do it if you have good intentions. 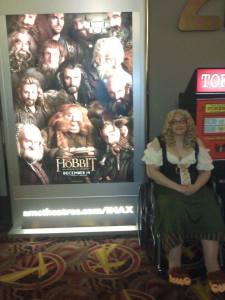 Lenore as Poppy Brandybuck, an original character, from The Hobbit

What is some advice you could give people starting to get into cosplay?
There are plenty of negative people out there but I always tell myself and anyone new to cosplay who is nervous that the cosplay is for yourself, first and foremost. Not the photographers, not the rest of the convention, not anyone online, but for yourself. Live it, love it, be comfortable, have fun. If someone doesn’t feel those four things then it won’t help lift you up and feel stronger. You will also always, always be learning as you get further and further into cosplay. What was right about a cosplay, what you felt was wrong. I constantly want to add things to cosplays, even on the day of a convention. I love what it’s done to the way I think and improved my creativity a lot.

What are some of your favorite conventions you’ve attended and why?
Anime Los Angeles was sheer joy to me. I had a lot of fun as Kyuubei, and I met so many other cosplayers who only made me love doing this even more. Anime Expo was great because my Pikachu made a lot of kids really happy, and I often see that my wheelchair off-puts children a little because they may not understand. It was like the chair was not even there after I put that cosplay on. Lastly, Stan Lee’s Comikaze Expo also saw my Pikachu since the voice actress for Ash Ketchum in seasons 1-8 was there, and I had to meet her wearing it. On the way out of the con I was stopped by Regina Carpinelli, the CEO of Comikaze Entertainment INC and host of Fangasm on the Syfy channel told me I looked great, and thanked me for cosplaying and attending the convention. I was blown away and blushed all the way home.

Give a random fact about one of your costumes that you’re proud of!
I mentioned the wheels I make for my wheelchair with every cosplay and I think I would have to say that. It was my own original idea so even though it’s something small, I’m very proud of each one I make. I’m planning a Dorothy cosplay for Comikaze Expo and if all goes well I will be blinging my wheels out to be my Ruby Slippers. I’ll tap my brakes three times at the end of the day and tell myself “There’s no place like home, there’s no place like home….”

Lenore as Gijinka Pikachu from Pokemon

Thanks for the interview, Lenore! You can check out more of her work on her Facebook page!

1 Response to Interview with Lenore