I had mentioned in an earlier post about a costume review coming up, and here it is! The German-based company, CosplaySky.de, sent me a Sword Art Online costume of my choosing. As such, I chose Kirito’s design from Sword Art Online II. I’d warn for spoilers, but hey, it’s over 3 years old, so NOPE.

The costume was specifically tailored to my measurements, which I sent over to them and all of their costumes are made that way. The costume took approximately 2 weeks to make, which is still faster than I can make a costume with a lot of tailoring. From there, the costume took about a week to arrive and came nicely packaged in a box, with the costume bagged with a photo of it inside. I had a wig close to the hairstyle and boots, so I didn’t worry too much about “accessorizing” to match.

I had to get used to putting everything on in order. There’s about 3 layers overall, with the shirt and pants, then the butt-cape and belt with it’s accessories, and lastly, the chest shield and coat. I quickly learned this a costume for a colder convention, lol! And as per my usual self, when we took photos, I forgot my gloves in all my excitement, but they were included with the costume as well. 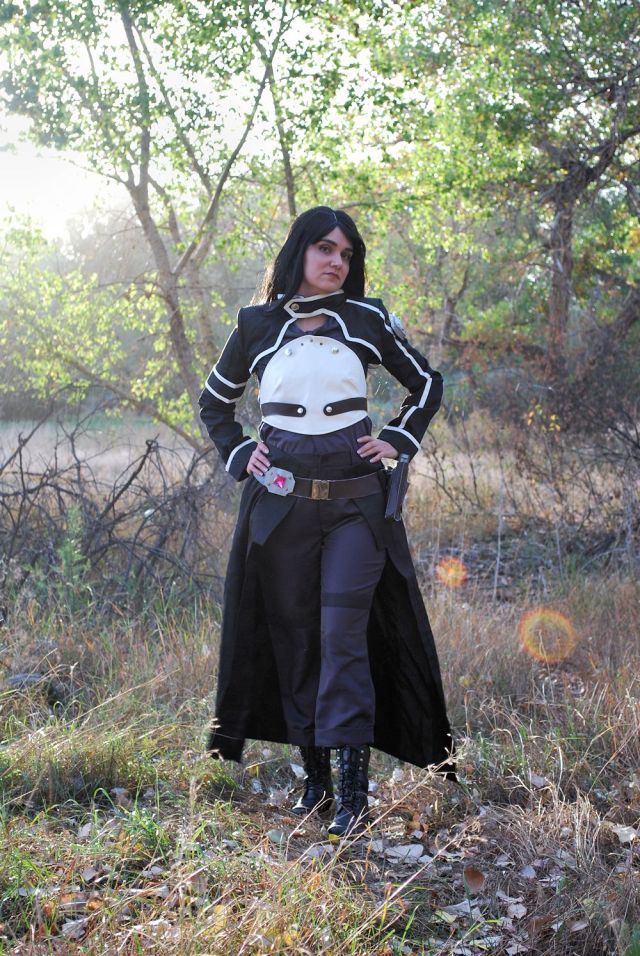 So, here it is! The pants, shirt, and coat fit like magic; they’re just that well-tailored. I slid on the gem and holster onto the belt, which the fabric used for it and the holster were my only gripe. I wish they were more finished looking, but they work for the costume. The butt-cape actually is fairly light and floats well in a breeze to give some pretty awesome pictures. The chest shield sits well, but I ended up pinning it up at the top to sit better after a lot of movement. The “metal piece” on the jacket snaps on and the armband just pins on, but it all sits well and moves without coming undone. 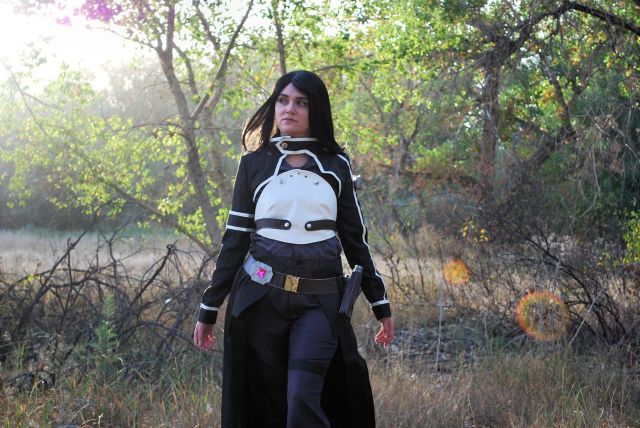 That edging work done on the coat? Better than most of my own personal work. The closure on the pants is a zipper and button, the shirt buttons, and all the neck closures button. This impressed me because I usually cheat with snaps due to my absolute loathing of buttonholes! I may make some fitting adjustments to the belt after wearing the holster with a prop gun in it, but it’ll be minor tweaks that I only notice when everything’s said and done.

All together, this costume was a pleasant surprise. The tailoring is well-done, the shipment and construction was quick, and the overall appearance, while needing minor changes for aesthetics for photos, is superb. Congratulations, CosplaySky.de, you made an outstanding piece and I more than recommend this site for costumes. And for those scared about their site being in German? Scroll down to the bottom of the page and the site is also offered in French and English! 😀