It’s time for another interview, this time with Ojii-chan! He’s a long-time cosplayer from Washington, who enjoys figuring out how to best crossplay female characters!

What’s your cosplay alias and why did you choose it?
It originally used to be Laughing_man in the old days as I was big on Ghost in the Shell, and it was ironic because I’m a quiet person and don’t laugh out loud that much. Later on I picked a better one that suited me: Ojii-Chan, which actually means “Grandfather.” I picked that even though I’m not a grandfather, but just to let everyone know I’m not trying to hide my age (like I did in the early con days), because I usually have 15-20 years on the average convention-goer nowadays. I still watch anime and collect figures and stuff even though I’m nearing the 50 mark (*shudder*), plus I’m lucky enough to still have a youthful look. My motto is: elder in time but young at heart.

How many years have you been cosplaying and what got you started?
Aside from being Han Solo for the Star Wars special edition in theaters in 1997, I didn’t officially start cosplaying until 2000 when I went to my first Convention: Sakura Con. I think I read up on conventions or something and saw that people dressed up when they went to these conventions, so I thought why not? So I cobbled together a decent Son Gohan costume and a not so decent Android 17. That first convention experience was an eye-opener, a lot of fun, so I kept on going. In 2018 that would equal about 19 years of cosplaying.

What has been some of your favorite things to work with when constructing costumes and why?
Well actually I don’t know if this question applies to me since I don’t have a lot of costume making skills, like sewing—the big one. Plus a lot my past costumes have been online purchases or they were made for me. I can tell you I’ve done handsewing, fabric cutouts and gluing, painting props and weapons and constructing a car out of cardboard for my son—Initial D. Among those I do like painting the props (like a guitar)and weapons and I also enjoyed doing a homemade screen print for a shirt and shorts for a costume-that was for an Ataru Moroboshi track outfit. It was a lot of work but when I saw the finished product I was pleased. Also I love to style simple wigs for costumes—such as most recently styling a wig for Motoko Kusanagi from Ghost in the Shell Arise. The results were also pleasing.

What are you excited to be working with in the future and why?
I don’t have any costume MAKING plans in the future as like I previously mentioned will usually just purchase them. I want to do a Sakura cosplay/crossplay from the Street Fighter Zero game, so that will need a wig so I look forward to styling the wig for that. I’ve been pondering whether or not to do a Mai Shiranui costume from King of Fighters. The question isn’t to make it or not, but rather how to pull it off properly. She bears a lot of skin so it would require maybe skin colored tights or spankies if I wanted to go that route or just wear some hot pants to be more discreet. All his goes over the hip and butt padding too. And how do we do the breasts if she’s not wearing a bra obviously? And the long wig? It’s a fun challenge to figure out how to cosplay a female character convincingly!

Ojii-chan as Vegeta from Dragon Ball Z/Super, photo by Darkain

What are some of the traits you like to see in other costumes and who do you think does well in them?
OOOOOh the details, especially in those wonderful game costumes, too many to mention but say for example Final Fantasy. I don’t really play those games, but I’ve seen footage and art of the characters and many, many cosplays of them throughout the years. There are so many little designs, patterns and pictures on the costumes it’s amazing. Also something like Tsubasa Chronicle or .hack// franchise—so many things people paint, layer on, or glue on it’s great! I also like how some cosplayers have a lot of props they carry around for their particular character. My wife cosplayed Kagome from Inu-Yasha a few years ago, and she actually brought a bicycle to walk around with, a yellow back pack full of actual snacks and a first aid kit, school textbooks and to top it off a Shikon jewel shard in a little bottle on a necklace string. It’s all the stuff Kagome has with her on the series. Or even a little detail like a Magneto cosplayer I saw at ECCC who put a magnet inside his gloves so he can pick up metal things—that’s a cool detail. Who does well in them? Well anybody can pull it off really whether you’re a veteran cosplay maker or a novice concentrating on their very first “awesome” costume. Although I’ll say more often than not, ladies fare better in those type of detailed costumes.

What is your view of the “cosplay scene”?
A lot has changed. From the beginning you have all these fans making their own costumes and they get better and better every year. Others buy them like I do and have fun with it throughout the years. But now you got “professionals” that are official convention guests and ask for money for their picture. And you also have these pinup cosplay girls online asking for money to finance their cosplay hobbies or get their digital pinup photos. I liked it better in the old days when it wasn’t about money, it was putting your heart into your costume whether you made it or bought it and less about money. I mean if it’s your career then I get that. Also you have people on the internet picking at your costume or your body type, age etc. which is not what cosplay is about. It’s not as innocent as it used to be.

What are some of the things you want to see change in the scene?
I’d like to bring back that innocence, take away the pros and erase all the online judging and begging for money, but that would be so difficult. But I think a lot of the smaller corporate sponsor-free conventions out there still strive for those innocent times. I think that’s the main thing: some of these anime or comic conventions started out so small and now are so huge that everything revolves around making profits and getting big numbers. They’re so based in industry now, they’ve forgotten about fans, what they want and the foundation where these cons came from. Anime Expo, Sakura Con, San Diego Comic Con, New York CC and Emerald City Comic Con are all like that. I do enjoy going to Emerald City Comic Con but many fans don’t like how it’s so big and industry based. These conventions all said in the beginning: created by fans for fans, but a lot of that is lost now on us fans. Let’s bring those cosplay contests back to the forefront like they used to be, and not be second fiddle to some musical guest that we never heard of, with the corporate sponsors sitting in the front rows. I think the power needs to go back into the hands of the fans and away from the money mongers. Maybe then the cosplayers only worry would be: what should I cosplay next? 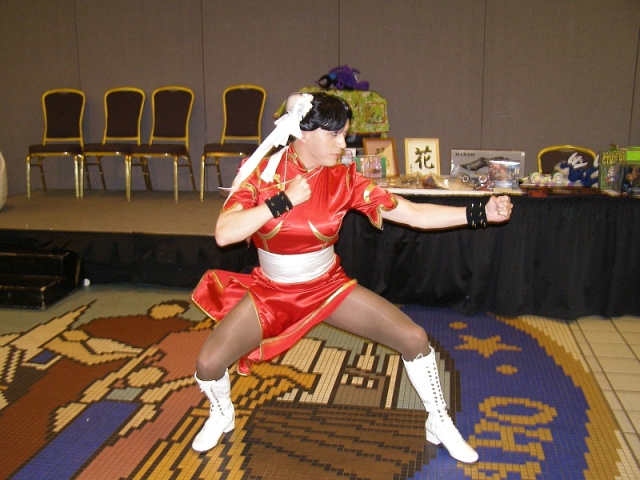 What is some advice you could give people starting to get into cosplay?
The sky is the limit. Whatever you want to be you should do it. If you want to start simple that’s fine. If you want to wear something more elaborate, go for it, and make it happen. If you can sew it all yourself, that’s awesome. If you need help, there’s nothing wrong with that. You can buy a costume if you like to. It will be different for everyone. Some will to start simple then maybe challenge themselves and later do some crazy stuff, and I’ve seen a number of “crazy” costumes and props in all the years I’ve been attending. There shouldn’t be any hindrance in making your dreams come true. That includes age too: little kids to senior citizens, make/get your costume and have fun with it, enjoy, be happy.

What are some of your favorite conventions you’ve attended and why?
Well you can see I worry about those bigger conventions, so I’ve got real fond memories of smaller cons such as Anime Oasis in Boise, Idaho. I went there from 2003-2012 and they were so much fun in such a little con, even when they did grow a bit. And I met so many wonderful people I’m still with friends to this day. I also like Anglicon, a british media convention that was around for many years then suddenly folded, then came back in 2014 when Doctor Who popularity peaked in the US. Again so small but you can meet a lot nice people, plus easier access to meet and see the guests who can walk freely in the convention area and not get mobbed. I’ve met Colin Baker, Peter Davison and Sylvester McCoy there! Geek Girl Con is unique as highlights the girls and ladies of fandom, which is great. There’s just as many lady artists, gamers and such out there as guys, if not more. I love going there. As for bigger cons I did like Fanime Con when I went there from 2005-2007. I had a great time shooting cosplay photos, seeing events and guests, and the weather was great and San Jose is a nice city. Finally I like attending Emerald City Comic Con, as huge as it is now. There’s so much to see and do there, and usually they have cool guests. Of course all of these conventions have some great costumes and cosplayers.

Give a random fact about one of your costumes that you’re proud of!
Well like I mentioned I usually buy mine, but I’m proud of building the AE86 Initial D for my son. First time I ever did that. But I’m mostly proud of my wife who has made most of my Ranma Saotome tops: a sleeveless red tunic, a light blue sleeveless and a wonderfully looking green long sleeved one. She made them all by herself and she’s making more! She loves that series. We got to know each other from the beginning from our mutual interest in Ranma ½. She also styled the Ranma wigs too.

Ojii-chan as Ranma from Ranma 1/2

Thanks for the interview, Ojii-chan! You can check out his Facebook pages here and here, and his CosPix page here!